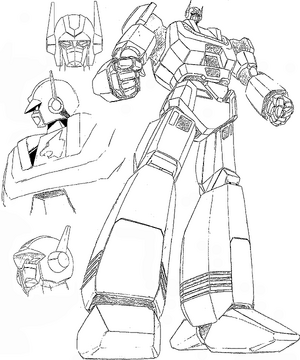 Largest robot body of Rom Stol, which is summoned at Ken Ryu's command of "Heaven, Earth, Fire and Water, grant me the power!". Ken Ro becomes a light in midair and crosses time and dimensions to bring the body of Baikanfu forth. In times where Rom wants to summon the body of and become Baikanfu and is not yet in the body of Ken Ryu, he is executing a process known as "Pile Formation" which summons the bodies of both Ken Ryu and Baikanfu in a single calling and Rom merges with them in one single process. When Baikanfū synchronizes with the planet's energy, he can draw upon the power of nature itself.

Retrieved from "https://machinerobo.fandom.com/wiki/Baikanfu?oldid=5788"
Community content is available under CC-BY-SA unless otherwise noted.